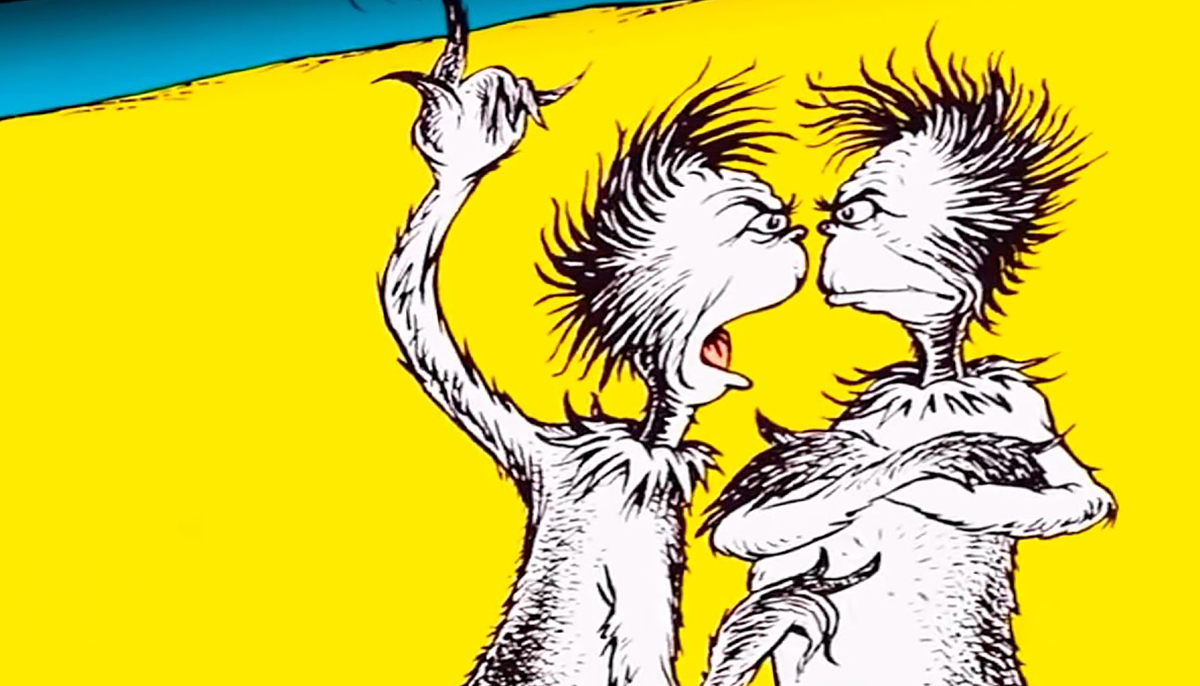 ​​​​​​​So it's come to this: we're canceling Dr. Seuss now. The beloved children's book author, who inspired generations by capturing the imagination of millions of children, has come under scrutiny after a woke, whistle-blower at Dr. Seuss Enterprises set a spotlight on some outdated depictions of characters in the late author's work because they, "portray people in ways that are hurtful or wrong." Granted, the books in question are not best-sellers - most of them you've probably never heard of - but it's a slippery slope. Since then, many online platforms, such as eBay, have begun removing Dr. Seuss from their stable.

Seuss cancellations illustrate exactly the problems with the condemnatory outlook that defines the liberal movement: a nonspecific justification - touted as axiomatic - attributed to nameless "experts" and "educators" that encapsulates a range of books and illustrations. Can't we agree it's okay to acknowledge some older works may be uncomfortable for some, but that addressing the potential for discomfort by scrubbing said works from the history books rob future generations of an opportunity to make their own assertion about the character of the artists? Or… strips those who come after of the invaluable lessons of our past? Cancel culture does not cure societal ills; only by acknowledging the stain of our moral failings can we pursue, with reflective cogency, a life-long commitment to be better.

As an homage to Dr. Seuss, we submit this poem which captures our feelings on this matter.

Look what we've done,
we've erased the past
of people, artwork, and books
that makes us NOW gasp.
All so children won't know
things weren't always the same
society ALWAYS thought
with the same liberal brain.
First, we tore down the statues,
then smudged out the art,
now we're erasing WORDS that give us a start
No history, no context, nothing of shame;
no renegade streams that break from the main.
Shine light on dark corners and lessons of choice,
so the future will know but a singular voice.
When will it end? Can there be a truce?
When leftists resort to attacking Dr. Seuss?

Here's an idea that's old but substantial,
and independent-minded enough for someone to cancel:
Let the past be the past,
so those with better ideals who have won
can look back and say,
"See how far we have come!
We used to think this, before we learned that...
We sure looked silly, like a cat in a hat!"
But without controversy or shame
how will kids know
the battles we fought
so we could grow?

​​​​​​​It's sad to admit, but the future looks bleak
with a past redacted by a cancel-culture streak.
And what sort of lesson does it send to the youth
that no nation's heroes were ever uncouth?
They always spoke true, and had thoughts pure -
never given to waver, misstep, or demure?
And when our own children stumble and fall
how can they consider their mistakes, and not be made to feel small?
They can't, and they wont, because we've made them believe
that history's heroes are beyond reprieve.
That no matter the life, it can all come down
to one or two words that made someone frown .
Then the whole of their work can be set afire
to the frenzied cheers of the cancel-culture choir.

Whalut will never cancel you. Whalut was built by an American-owned small business, like the customers we hope to help exceed, and exists to help companies and individuals conduct business without fear of political or cultural coercion. Regardless of what you think or what you're selling, Whalut will never shut down your commerce engine, even if we disagree with you. Everyone has this idea that buying American has to be more expensive. Whalut is here to prove differently, so buy American and keep your money in your Whalut.

Where Do You Go When The Left Says No?